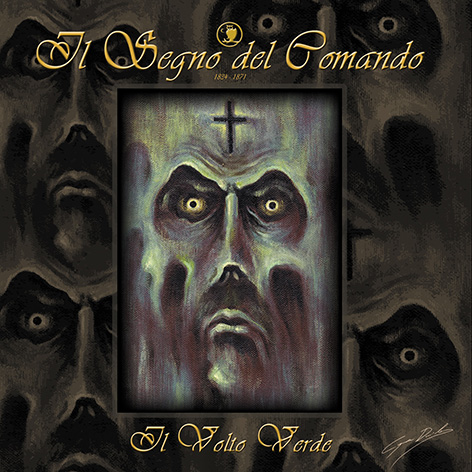 IL SEGNO DEL COMANDO is back 12 years later.
New line up and new album out for one of the most mysterious and charming rock bands from Genoa (Italy). The band has been inactive until 2010, when Black Widow Records and Diego Banchero finally got back together in studio and renewed the line up (with Diego Banchero managing the whole project since Mercy left the boat).
The band takes part in the same year to the tribute to Pierrot Lunaire released by MP Records from Vicenza, and immediately after, started recording "Il Volto Verde" (the green face), concept album inspired by the novel of Gustav Meyrink, well known masterpiece that represents one of the main subjects of his esoteric testament.
The book also describes some techniques related to the mind control and that brings to the so called "mental emptiness" as consistent connection to the "superior self" that along with being a door on the subconscious, it also connects to the "Universal Mind" itself.
This is a rather complex project: "Il Volto Verde" features various collaborators like Claudio Simonetti from Goblin, Gianni Leone from Balletto di Bronzo, Martin Grice from Delirium, Freddy Delirio from DEATH SS, Paul Nash & Maethelyiah from The Danse Society, Sophya Baccini from Presence along with Osanna e Delirium, all under the leadership of Diego Banchero.
The prog-jazz rock-soundtrack-experimental-dark essence that characterises the tracks in the first couple of chapters has been well developed and rooted.
The masterpiece's cover features an impressive and shocking painting from the artist Danilo Capua.