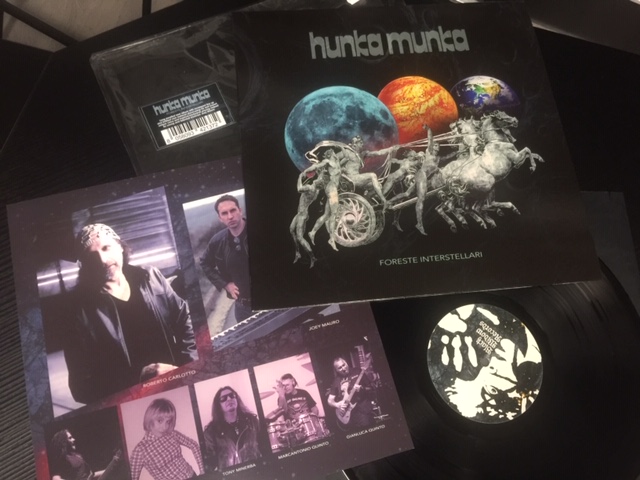 Keyboard player Roberto Carlotto from Varese, whose nickname was Hunka Munka, began playing since his childhood, though his musical career was seriously compromised by an aircraft accident that caused him some heavy injuries.
His beginnings as a professional musician took him to play in England, Germany and Switzerland, where he even had the chance of supporting such artists like Rod Stewart and Colosseum. In Italy he had previously played with Big 66, I Cuccioli and later with Ivan Graziani (Anonima Sound â€“ 1970), before entering a solo career starting with a single in 1971.â€¨As a solo artist, Carlotto was easily recognized by his very good technical quality and the high level of his equipment, that included an incredible number of different keyboards and even the early examples of tape drum machines.
His only solo album, Dedicato a Giovanna G., with his outrageous cover, is a soft-prog album, obviously dominated by Hunka's keyboards (especially his self-customized Hammond organ) and odd tremolo voice resembling Demis Roussos or Bee Gees. Among the backing musicians were drummer Nunzio "Cucciolo" Favia from Osage Tribe and guitarist Ivan Graziani.â€¨
After the album release Carlotto joined Dik Dik in 1973, again with drummer Cucciolo playing with him too later as "Carlotto & Cucciolo".â€¨He has also presumably released an electronic album in 1984, Promise of love (Atlantide AMX 12003), under the name Karl Otto. In 2011 Roberto Carlotto joined the reformed Analogy playing with them many concerts.
In early 2000's Roberto Carlotto started a collaboration with keyboardist Joey Mauro, talented user and repairer of vintage keyboards; together they revitalized the Hunka Munka name.. and finally they released a new, inspired album called â€œForeste Interstellariâ€ in which Carlotto writes lyrics, plays keyboards and sings lead. Joey Mauro plays keyboards as well and writes music together with Mr. Hunka Munka.