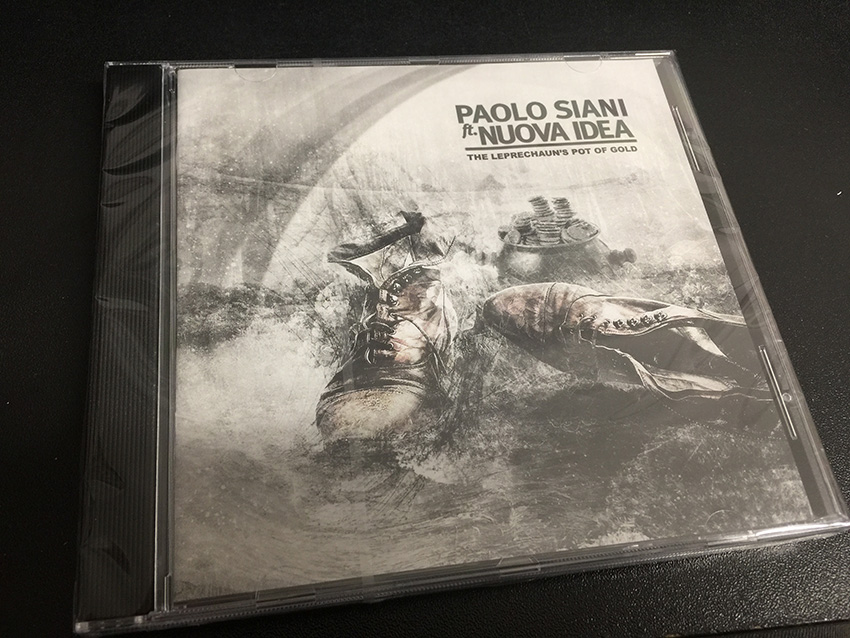 After ‘’Castles, wings, stories and dreams’’(2010) , ‘’Live Anthology’’ DVD (2014) and ‘’Faces with no traces’’ (2016), the album with the Remixed Single ‘’Black Angel claws’’ produced by Alessandro Siani with ex Prodigy Leeroy Thornhill, Paolo Siani presents the third album of his Trilogy ‘’The Leprechaun’s pot of gold’’ which will been released on next January 25th 2019 for Black Widow Records.
Siani offers us another chapter of his music with seven original tracks, written played and arranged by himself and an official Bootleg of a 1971 live recording during a Radio show at Rai Radio 1 with a rearranged version of Cream’s ‘We’re going wrong’.
Prog atmospheres between blues, soft psychedelia with Floydian reminiscences, lyrics in Siani’s style of existential themes without any particular political orientation but not for this less important and incisive.
Very respectable the cast of musicians which collaborated on the realization of the tracks: Giorgio Usai Hammond organ (Nuova Idea, New Trolls), Roberto Tiranti lead vocals and bass (Labyrinth, Wonderworld), Paul Gordon Manners lead vocal in ‘Standing alone’ (English producer and guitarist), Anthony Brosco lead vocal in another version of the same song (produced by Alessandro Siani at Pitea Studio in Brighton (UK), Martin Grice sax and flutes (Delirium), Guido Guglielminetti bass (Artistic producer of Francesco De Gregori), Nik Carraro electric guitars, Ivana ‘Ivy’ Gotti Theremin, Marco Biggi drums in ‘Time to play’, the Giacomo Puccini Band (M° Costanzo Manza director) and Giangiusto Mattiucci Rhodes piano.

Single:
The Leprechaun's Pot of Gold

From the third solo album of Paolo Siani feat Nuova Idea ‘’The leprechaun’s pot of gold’’ released on next January 25th 2019 for Black Widow records (BWR 215Lp – 215-2Cd),
Is the first single out in these days. A leprechaun is a type of fairy of the Aos Sí in Irish folklore. They are usually depicted as little bearded men, wearing a coat and hat, who partake in mischief. They are solitary creatures who spend their time making and mending shoes and have a hidden pot of gold at the end of the rainbow.
Siani paraphrase this gnome to express his opposition to the financiers and bankers greedy for others' money.
This track has Prog Rock cadences in a pretty easy form but really endearing
using electonic sonorities, mellotron and keyboards in addition to the elecritc guitar played by Nik Carraro on a powerful rythm section.