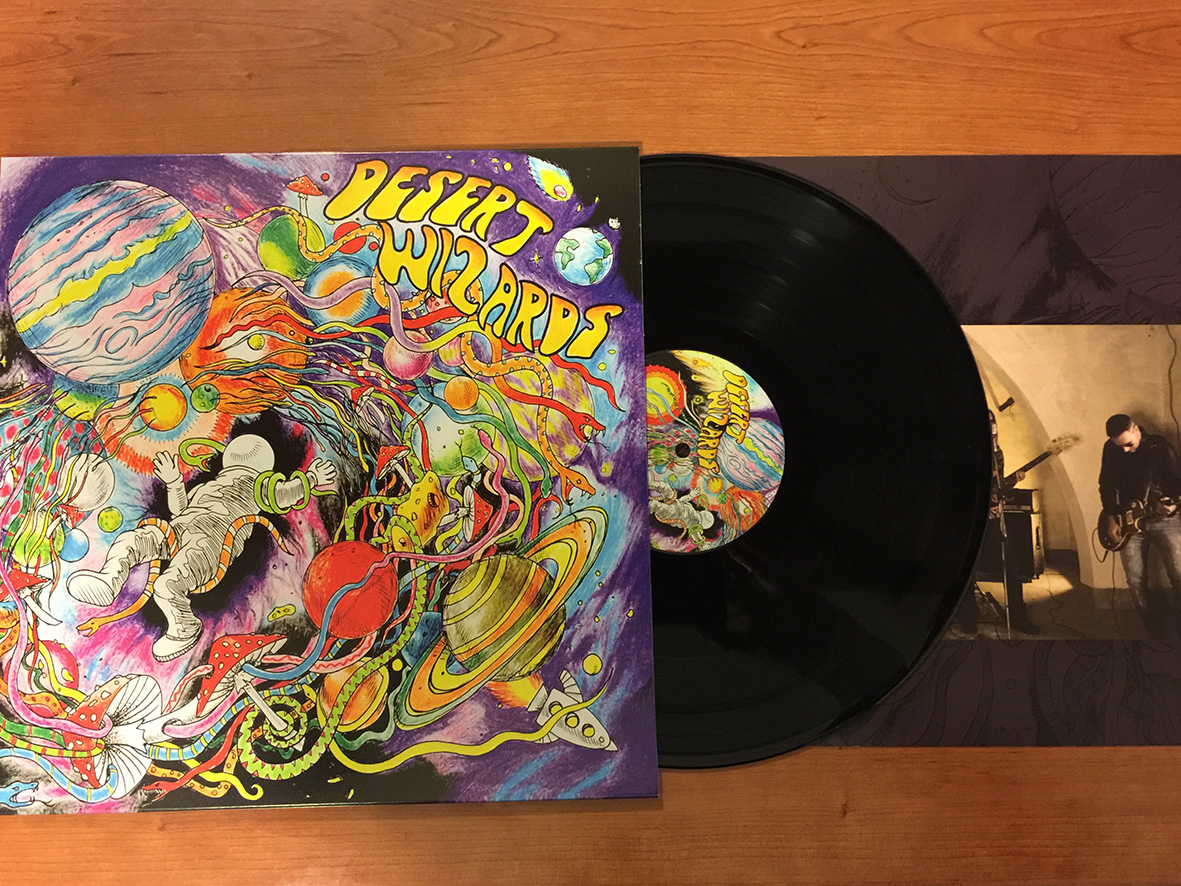 DESERT WIZARDS - Beyond the Gates of the Cosmic Kingdom LP + insert

Desert Wizards was formed in 2007 by four music-loving friends from Ravenna, who despite of having in common the love for the typical sound of psychedelic and hard rock music of the 70ies, have never had the occasion to work together. As that kind of music requests, the four dedicated months of improvising in challenging jam sessions together from which results the basis of their first pieces.
The rough-and-ready recordings contain a handful of pieces of pure rawness and the band therefore decides that the moment has come to record a homonymous demo that appears in January 2008.
The demo, that today is hardly possible to find, contains 5 pieces of pure psychedelic hard rock, the essence of the band.
Thanks to its success in Ravenna’s underground scene, Desert Wizards start to move their first steps onto stages in and around the zone nd decide after one year to construct something more important. They therefore withdraw themselves again in their refuge and throw themselves into long jam sessions in order to compose proper music rather than common pieces. The result is “Dos”, the first full length totally self produced by the four. A sincere album without thrills that narrate their musical journey in a dreaming and evocative way.
This work awakes the attention of Black Widow Records who are always alert to discover hidden talents in the italian rock scene.
In this way, in 2010 a new version of “DOS” simply called “Desert Wizards” gets released through the record label. The material gets reworked and entrusted to a professional producer without distorting the typical sound of the band. The album is well accepted by critics of the sector, getting positive recessions and achieving good results in sales.
The year after, “The Lisergic Show” out of that album gets included in the “Hard Rock Explosion” collection in which Desert Wizards work side by side with artists like Pentagram, L’impero delle Ombre and Wicked Minds.
In 2012 they get contacted by Mag Music and recorded the cover of “Childhood’s End”, from the album “Obscured by Clouds” of 1972 that then gets published in the compilation “One of my turns” in the same year. It’s the album involving many Italian bands as a tribute to Pink Floyd. But the four from Ravenna, never satiated and in desire to compose, find themselves at the end of the same year with heaps of material that enables them to realize almost two full lengths obtaining “Ravens”, the second record adventure shared with Black Widow Records. The album gets published in 2013 and the decision is taken to produce also a vinyl version which sells out in short time.
The label entrusts the work to an international distribution that allows the band to be known in various countries, obtaining best response both in critics and sales. It’s again a production entirely in Desert Wizards style, where the most hard parts in a decisive Black Sabbath style leave space for elaxation and Floyd-like and Doors-like atmosphere. Hereafter, the band starts to experience more and more vintage sounds, introducing the synth to their musical repertoire, allowing a vast range of effects to the modulation of sound and a long composing work starts, that then comes to an end in 2015. The pieces that get extracted are the result of exhausting arrangement and researches of sound to an extent that the band does not want to allow compromises. In 2016 the recordings end and “Beyond the gates of the cosmic kingdom” is released, the last, longest and meticulous labour of the band.
In May 2017 Desert Wizards publishes the video of “The man who rode the time”, a single of the album in question that will be available from July 2017 on, through, yet again, Black Widow Records, in 300 ltd edition vinyl copies and CD.